When Rutam Vora was growing up in Vadodara, a city of about 2 million people near the western coast of India, his parents kept cool each summer by drenching bedsheets in water and hanging them in the windows of their house. When the scorching westerly wind known as the loo swept in and hit the sheets, the evaporating water absorbed the brunt of the heat. White chalk spread on the roof reflected the sun and dropped the temperature further. They were old methods of coping with the heat, like drinking lassis or chaas when “struck by the loo,” and they were effective.

Earlier this year, Vora’s mother came down with a bacterial infection, and part of the doctor’s prescription was to stay cool. When the meteorological department warned of yet another punishing summer on the way, Vora decided it was time to buy an air conditioner.

Across India, millions of people are making similar calculations. The share of Indians with air conditioning is still small, roughly 5 percent, but it’s growing fast. Rising incomes are making air conditioners more attainable, while rising temperatures are making them a necessity. “There are hundreds of millions of people for whom air conditioning doesn't seem like a luxury good,” said Michael Greenstone, director of the Energy Policy Institute at the University of Chicago. “It can mean the difference between life and death.”

The cooling industry has found a ready market in Ahmedabad, the largest city in the state of Gujarat. The city bakes each summer until the monsoon comes, at which point temperatures drop into the 90s and the humidity rises to stifling levels. Above the city’s winding streets, crowded with fleets of auto rickshaws and mopeds, billboards declare that every home deserves Hitachi cooling. Elsewhere, Panasonic ads extol the speed at which its “life conditioners” can cool a room. Apartment ads list AC first among amenities offered, and restaurants promise relief from the heat. Appliance shops along the roadside display the industry’s major players in big letters on their windows: Hitachi, Mitsubishi, Blue Star, Panasonic, General - the King of Cool, etched in glass with a crown - Daikin, Carrier.

The world is on track to add 700 million new ACs by 2030, and 1.6 billion by 2050, largely in hot, developing countries like India and Indonesia. But the AC boom threatens to worsen the crisis it’s responding to, and widen the divide between those who can afford to stay cool and those left out in the heat.

Air conditioners use refrigerants, and some of the most common types - hydrofluorocarbons, or HFCs - are powerful greenhouse gases, with thousands of times the warming potential of carbon dioxide. If HFC use continues to grow at its current pace, these chemicals could make up as much as 19 percent of emissions by 2050. International initiatives are set to phase down the worst offenders, but air conditioners contribute to climate change in a second way: they consume a tremendous amount of electricity. Handling the growing load will require adding thousands of new power plants to the grid. 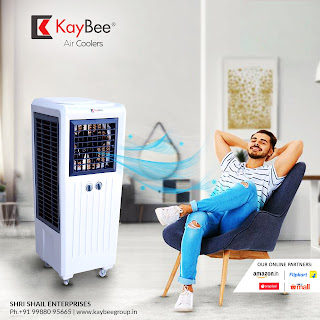 Coolers can also do something air conditioners can’t:
because they lower the temperature of the air that passes through them, rather than removing heat from a sealed room, they can cool people in huge open spaces and even outdoors. Cavernous factories, warehouses, outdoor restaurants, and amusement parks will be growing markets for coolers, especially as temperatures rise.

As you can see that air coolers definitely have their own place in the world. Especially, since they come with such a host of features like silent operation, remote control, multiple speed settings and more. Moreover, nowadays coolers are digitally enhanced and aesthetically pleasing to fit right in.

Now that you are informed, go ahead and invest in a quality air cooler to keep the sweltering heat away. http://www.kaybeegroup.in/

Posted by KayBee AirCoolers at 11:26 AM